Veea’s Edge Platform technologies include vMesh, a high-performance, self-healing, and self-organizing network that automatically gets created upon the installation of VeeaHub™ devices, and vBus, a communication bus inside a VeeaHub Mesh Network and beyond.

With vMesh networking, different nodes communicate with each other, with the help of either a wired or a wireless connection. At the same time, all the nodes in the mesh can cooperate in the distribution of data in the network. The lack of dependency on one node allows for every node to be optimally considered in the relay of information. Each node can self-configure, which enables the dynamic distribution of workloads, particularly in the event of node failure. This, in turn, contributes to fault tolerance and reduced maintenance costs.

When VeeaHub devices are activated for the first time, they have to be enrolled using VeeaHub Manager™ App. This app runs auto-configuration on the devices with the help of the enterprise server and installs all the services needed for vMesh. Once that has been done, the app asks the user to either enroll the newly added device to an existing vMesh or create a new mesh network. 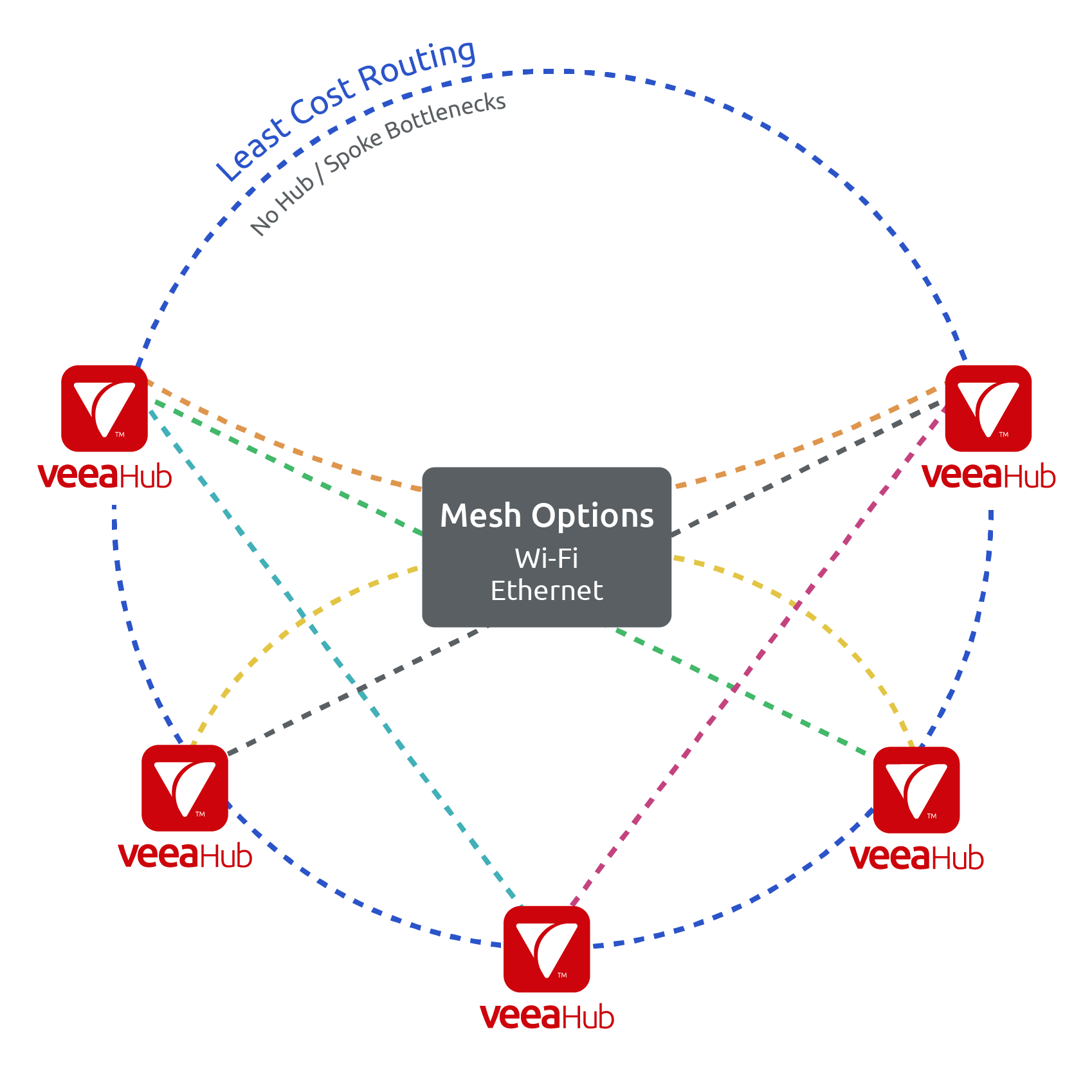 Every Mesh contains multiple VeeaHubs and every VeeaHub contains multiple Services. Each one of these services has been developed and deployed by different parties. vBus provides discovery and communications between Services across the Mesh.

vBus’ first mission is to provide access to Hardware-related capabilities, no matter where a Service is running. For instance, through vBus a Service can access Bluetooth device connectivity and communication thanks to a dedicated module providing a bridge between low-layer Bluetooth drivers and vBus. Each module provides a tree of data attributes, nodes, and methods for other Services and applications to interact with.

Although a primary focus of vBus is to provide access to hardware devices, it can also be used to access non-hardware related services such as those found within the IoT gateway services, as well as providing a standardized message bus solution that can be used to allow complex multi-container applications to interact within the container network without the need for creating an additional messaging solution.

vBus is the secret sauce that powers vMesh. vBus is a hardware abstraction layer with a set of services and an API in multiple languages.

It abstracts all the details about mesh, device discovery and microservices while configuring applications at the edge and providing seamless secure access to the edge devices.

In computer security, a chain of trust is established by validating each component of hardware and software from the end entity up to the root certificate. It is intended to ensure that only trusted software and hardware can be used while still retaining flexibility.

To help protect VeeaHubs and the Veea Edge Platform™ against attack, the following “chain of trust” security architecture has been designed from the software through the applications that run on the edge.

All applications running on the Veea Edge Platform run in software containers – independent, self-contained software objects. These containers are given the minimum system access required for their function, and co-resident applications cannot interact without authorization.

Veea is an organization at the forefront of technological innovation and advancements. The company has been granted over 55 design and product-specific patents in the areas of edge computing, wireless communications, product miniaturization, antenna design, and more. Veea has additional patents pending and continues to file new U.S. and international patent applications on an ongoing basis.